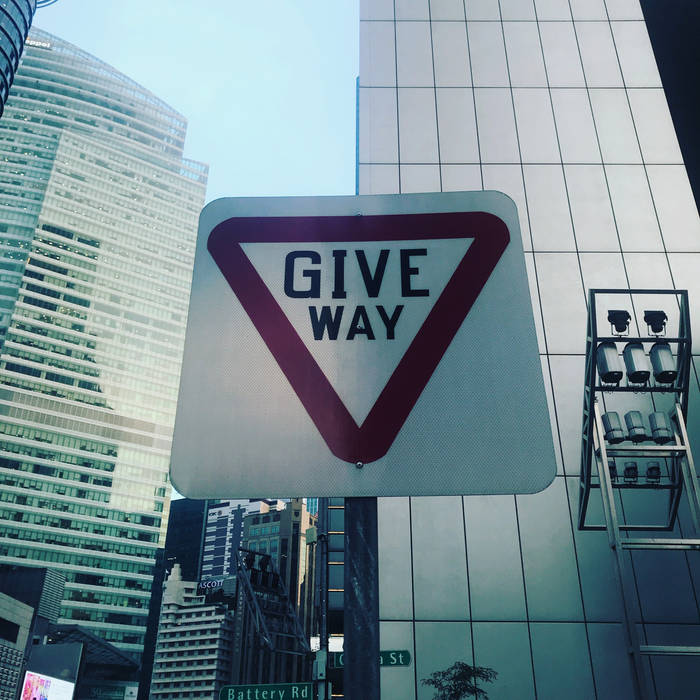 This Album titled “GIVE WAY” is DUO Album made by Guitar and Piano. Although, Guitar was played by human, but, Piano was Played by AI named “PerformaceRNN (magenta.tensorflow.org/performance-rnn)” made by Curtis Hawthorne ( github: cghawthorne , Twitter: @fjord41 ) and Nikhil Thorat ( github: nsthorat , Twitter: @nsthorat ). It has 8 tracks. detail is 7 tracks who played by “Human and AI”, and 1 track who played by “Human and Human”.

So, why I made such like this album? It’s take advantage 2 things, as loosely.First one is “Manifesto of Artificial Intelligence Art and Aesthetics” (www.aloalo.co.jp/ai/emanifesto.html) that written by Hideki Nakazawa.

At first in article, he said.

I think, “it is possible for only thought experiment. Because, proof impossibility is too high (if Human has been evaluate about which “aesthetics” that was done by AI”, it is not become “only AI’s aesthetics”). now that I take a position “Nakazawa’s Manifesto is not good thought experiment”. Also, I honestly feel from this manifesto is who they are thinking like somebody else’s business about thing for AI will do in future.

But, Question about “If AI have aesthetics” is not need to deny, I think at same time.

At second in taken a chance to think more, I got. When I discussed with Nao Tokui who he is one of famous AI researcher and my old friend at talk event at Graduation Exhibition at IAMAS2018. We talked 2 topic. One is “Possibility about making mediocrity AI who take a according to some kind of training.”. Second is “Expression by bug who may be happen by AI”. I made this album that I focus to target below by connect these issue to Nakazawa’s manifesto,

“Whatever if AI have aesthetics, how can we associate with it? Can we take a feel it?”

About Human evaluate AI’s Aesthetics, then after the fact, such like somebody else’s business is “Evaluate by human” that I wrote in this text before. It is not be “to evaluate AI’s aesthetics”, truly. So, I think that I need to get relationship with AI as my own business. In other words, This Album is that from such motivate, in assumed to be able to feel about AI’s exist and aesthetics in making some kind of else with collaboration at same time. And this album is trial to think how can we associate with “AI that exist asHuman, but is not human” that through playing music with he.

“Music” as this album include that till be written this contents by me. However, this things points to “low autonomy as art” of this music, and When thinking “trying to empathize with” onto AI side, it seems to be functioning as a problem presentation for AI’s aesthetics’ low autonomy (At least, as state on myself, now. And as fixed range as environment by “PerformanceRNN”). Furthermore, the reason why I have to write such sentences is avoiding for “it is swallowed by the diversity of context for music and arts” and “Impression is depend on ability of interpret by human”.

But, there is one song through this album as that performed with human. This song’s piano player named Risako Morita, she have not hear beforehand about that “concept of this album” and “Other songs about performed with AI”for this recording session. may be that everybody be able to catch clearly come to mind about difference with compare with AI and human, I imagine. I don’t know how explaining to about a sense of security when I hear that song title “talk with human”. But rather thinking “feeling” about lie down on between AI and Human will be became one of point of view about relation of human and AI on aesthetics.

At last time, one more thing about this album that story as “Music”. I think that making this album be targeting two other album that far from each other, too. I feel inferior to introduce them, because each album is known as famous recordings. one is “Undercurrent” by Bill Evans and Jim Hall, another one is “Jazz from Hell” by Frank Zappa.

“Jazz from Hell” is that computer playing difficult musical pieces as like pointing to feasibility of computer, and one guitar solo piece by Frank Zappa that playing on live recording is put on as like for to contrast each other (and as like for their fans).

Of cause, I never say “this album is equal as that two album”. Basically, it is better that I need to say as a lie even so, maybe. But, so many player who make better music than me will become in future, and I want that situation. but, just now, I can be rephrased bellow sentence bt using there album context.

On Concept of “Undercurrent”
And using context of “Jazz from Hell”
Just now
If Guitarist will playing,
Who does he pick out co-player?
What does they make?

In originally, this album’s basic plan was try to make “Ambient Album”, so if you have hear like as ambient music, you make me feel happy, too. In a same time, when I done to such a trial, I feel that music of this album is able to think and bring back to nowadays about relation of between human, and between human and computer in the past.

If somebody will get same feel, that’s make me happy.

Hiroshi Yamato on Electric Guitar (All Ambient track made by Guitar with effecters. No Overdubbing and No Synthesizer), Director and Producer.

Bandcamp Daily  your guide to the world of Bandcamp